Tales from the Duck Side

Every year a pair of wood ducks nest in the maple tree right outside our back door. We have never seen the babies--until this year!! Jeremiah our son-in-law stepped outside and yelled back in to us "Hey there's baby ducks falling out of the sky!!" Some landed on the ground, and some on the deck. they literally launched out of the maple tree, and found the mama who was waiting along the side of the house. The kids put the babies that landed on the deck where they could find mama duck. One got hurt in the fall but waddled to mama just fine. She then led them under the veranda and waited for us to go away before leading them to water (pictures taken by Graci). 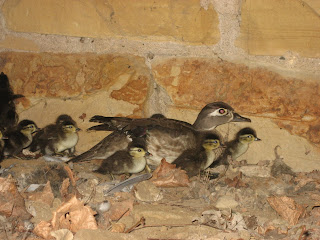 We had a busy weekend with Grace's grad party, a surprise visit from our daughter and her family, having all 5 of our kids home for a couple of days, and Jon's mom staying here and baking for the party. Childhood pictures and graduation pictures in piles and on display boards, my mind goes back and I think about the launched, the launching in process and future launchers.
I think about that Papa & Mama duck and I take a lesson. The nest is higher than a second story window, they chose safety for the first stage, knowing that the next stage would be a long drop. My brother told me they have to drop in order to live, an Internet search proved and disproved this. Either way us parents have to release them for the launch. I wonder if the launch and fall is an adrenaline rush for the little ducklings. The mama duck quacks a few times and just waits, she's not all frazzled and racing around making sure the landing is soft. When the ducklings have all found her she gathers them around, waits for them to all settle down and away they go out into an even bigger world. 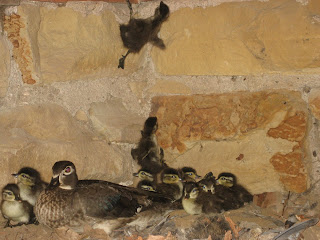 Two of ours have left the nest. The first one launched successfully, although loss has touched her life she is swimming in the big pond, building her nest, touching lives and tending little souls. The second one launched, fell hard, and has chosen to not follow the leader. In the picture above he would be the one climbing the wall, another one is looking up to him. This is where I really need to take mama ducks lesson and not panic, just call and wait until they all settle down and lead by example. Now the third on stands on the edge, ready to leap. She will launch "Grace"-fully. Two left in the nest, and here I am learning lessons as I am trying to teach them!
Posted by Jody Blue at 8:33 AM

You were able to snap that as they fell. Amazing. No one was hurt?! It looked like they could have been.

Oh my, what a great lesson that mama duck has for us. I'm so glad you are the big sister. You see I'm the younger duck who gets to sit back and watch, learning from your example. Thank you for being a great teacher, and always supporting me in my mama duck journey.

I've been back to read this 3 times-great job!

Nice blog. I've read it a few times as well. I love how you made the connection between the ducks and your kids and faith. :)

Aww, they are so cute! Great analogies too, it's amazing how much we can learn from even watching ducks!