...around Olympia WA(my trip to see my sister continued) there is alot of fun stuff to see and do. The Farmers Market is really fun, it's big enough to have a good variety of things but not so big that it wears you out. Most of it is covered so even when it rains the buying and selling continues. 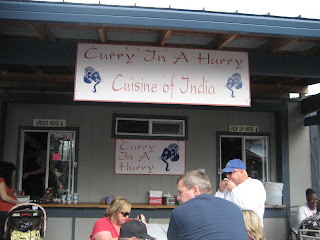 The food court has alot of fun choices from German to Oriental to Mexican and local. Tami had Curry in a Hurry, the name just made me laugh...and she did get her curry lickety-split! 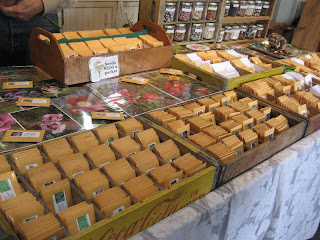 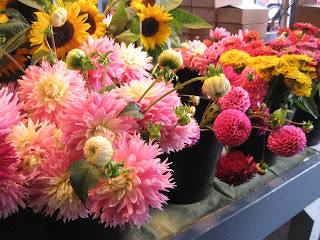 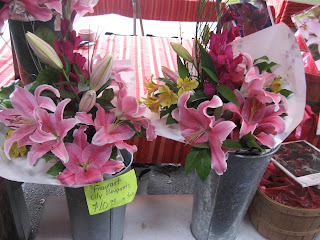 ...and more flowers. This just amazed me that the beginning of October and flowers were blooming, not just the ones for sale at the farmers market but in back yards, front yards, along boulevards and in turn abouts. 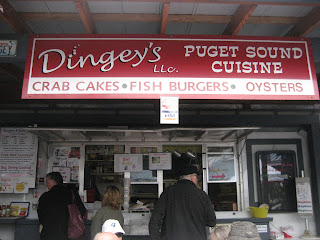 Barb & I shared a crab cake with a side of coleslaw, it was so good and fresh. Then it was time for dessert. 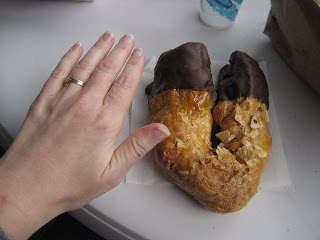 Horn of Marzipan as big as my hand! 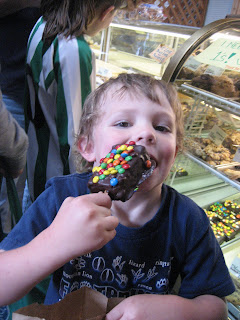 Bubby went for the brownie on a stick! 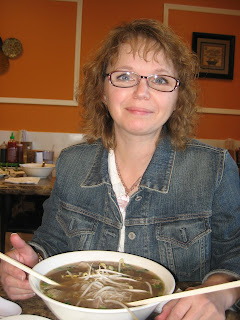 Tami the phoodie introduced us to "phoo" (like fa as in fa la la la). I'm going to make it for my family, I think I can come pretty close to duplicating it. 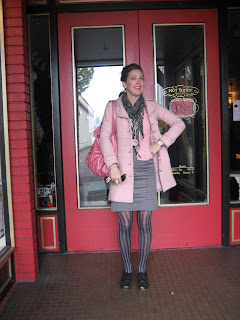 The proprietress of this retro little shop, isn't she fun!?! 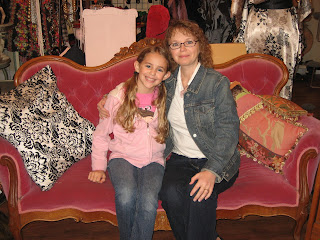 The inside of the little place was just as fun for the Princess and I. 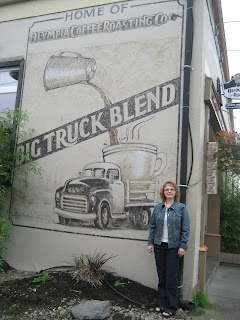 A stop off at this little place for a cup of joe-lt. 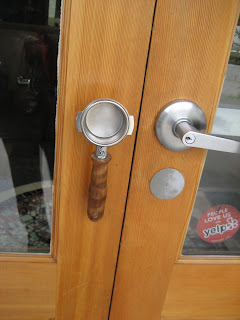 I love details like this. I'd stop for a cappuccino just to get to use that door pull. 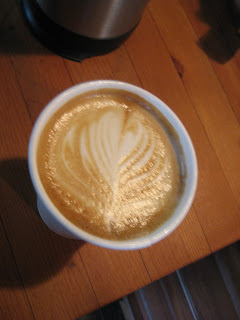 Details:) Don't let the love on the top of my latte fool you this stuff was high on the jolt-o-meter! I'm a serious caffeine wienie, so about 1/4 the way threw it my hair was standing on end and I was starting to talk alot...the Princess finished it off for me...we dropped her off at dance so she had a place to utilize the caffeine:) 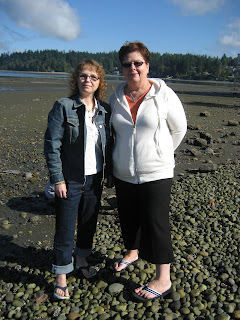 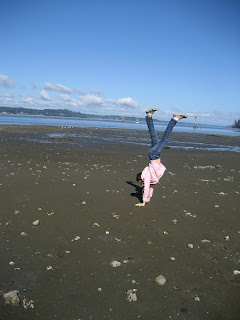 Such a creative WAy to WAlk on the beach. 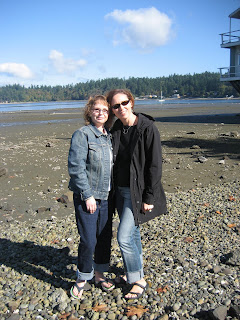 My sweet sister Tami and I. 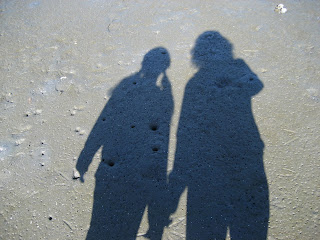 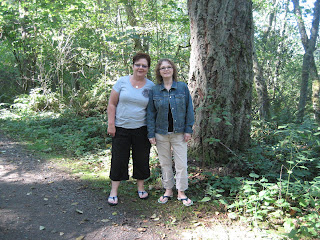 Wood WAlking, Barb and I loved-loved the tree's they are just plain huge and tall...very very tall. It felt like the Hundred Acre Wood. 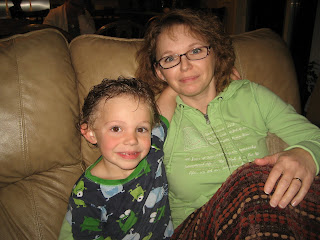 And after the little WAlks here and there...my heart WAs WArmed:)
Posted by Jody Blue at 7:55 PM 7 comments:

WAaaahoooo!!!
I was blessed with a trip to WAshington state to visit my sister and her little's!! 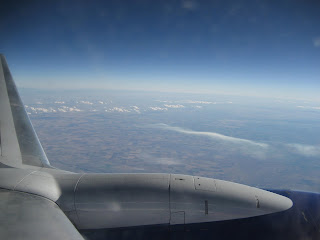 My friend Barb and I went, she was kind and let me have the window seat. I was like a 5 year old with my nose to the window on the flight out, I was also probably as annoying as a 5 year old can be with my play by play of what we were flying over. All the lakes of MN was so neat to see. Across ND and MT it was pretty much alot of uninhabited land, it had a stark beauty to it. The closer we were to the Rocky mountains the land looked like a velvet quilt made in hues of dark greens and browns, so pretty. Then mountains with silver streams and then clouds. 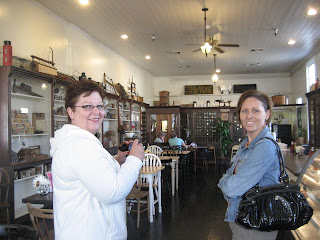 The first day there Tami took Barb and I to Steilacoom for a Thai shrimp salad(Tami is a serious foodie) and oddly enough as I type this out I am really hungry for that salad. We then did a bit of sight seeing, and then for desert to this quaint little place that was once a general store, pharmacy, and post office all in one...so that's where Target and Walmart got the idea:) 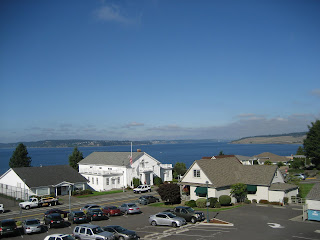 The middle white building is the Steilacoom city hall, it was so picturesque. And just look at the view of Puget sound. 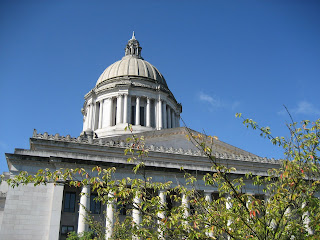 Another day we visited the state capital in Olympia WA. 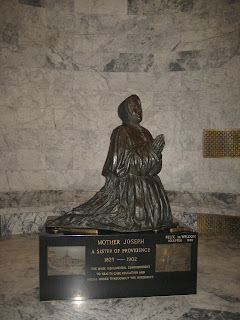 Statue of Mother Joseph, she was a huge part of the settling of the Northwest. She not only designed 11 hospitals, 7 academies, 5 Indian schools, and 2 orphanages, she also raised money to build them, oversaw, took part, and inspected the buildings, clearly she could bring home the bacon, build the kitchen to fry it in and then fry it up in the pan. 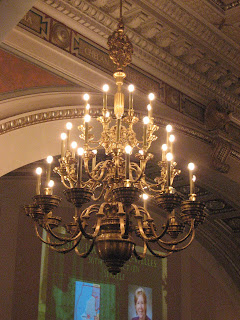 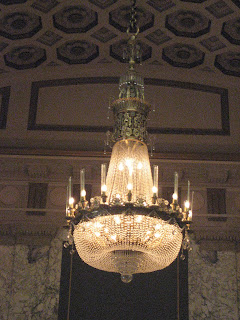 Two of these really pretty chandeliers hang in the State Reception room. The me that dabbles in a bit of jewelry making would love to just touch those crystals, or at least be around when they clean the thing, can you imagine!?! 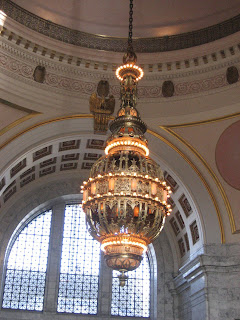 In the Rotunda hangs the largest chandelier ever created by Tiffany, its chain alone weighs 1&1/2 tons, the chandelier weighs 5 tons. During one of the 3 earthquakes to really shake the place it swung for 3 days(it might have been more, I can't recall and so for the sake of not exaggerating I'll stick with 3 days until Tami sets me straight or I get curious enough to just call the number on my capital brochure and ask...I may suggest that they put this kind of information in the brochure so that inquiring minds like mine can know these things. I did try to google it but apparently its a state secret that only the tour guide knows and the rest of us can't remember long enough to get it on the web!) 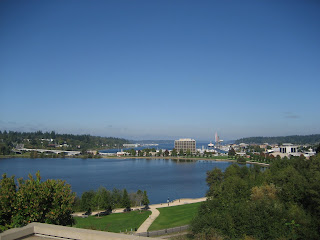 The capital over looks this little man made lake that over looks Pudget sound. The rest of the trip is soon to follow. I have to do it in a few posts, there is just so much to share.
Posted by Jody Blue at 10:44 PM 6 comments: