My raspberry patch was HUGE this year! I think it was the cool weather we had, the summer heat just wasn't around to stunt their growth. Some of the canes were over 6 foot tall. It made for really nice picking with no stooping, which I took as a personal gift from the Lord! 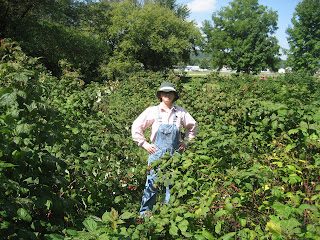 I'm sure I've mentioned how much I love picking berries, here I am in my berry pickin' attire in the middle of the patch. By the end of summer the 5 foot path between the rows was not passable in spots because of the bent canes. 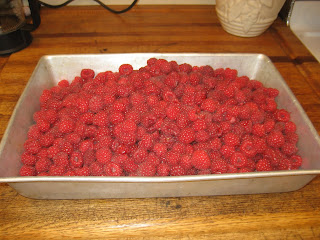 The harvest was just as HUGE with berries that were also HUGE! We also had tons of Siamese berries, I wonder what causes that. But there were a couple of things that bugged me... 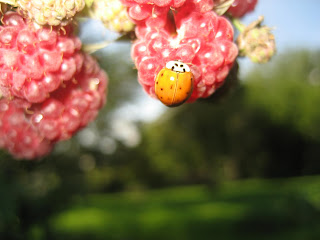 Now these bugged me a bit, they are the pesky Asian beetle, they do do some damage but nothing that causes me much concern. Now we have never used pesticides on our raspberries. Bugs don't really bug me much. Some bugs are good. I love creation and figure its good to share the bounty with Gods creatures great and small....EXCEPT for this HUGE problem................. 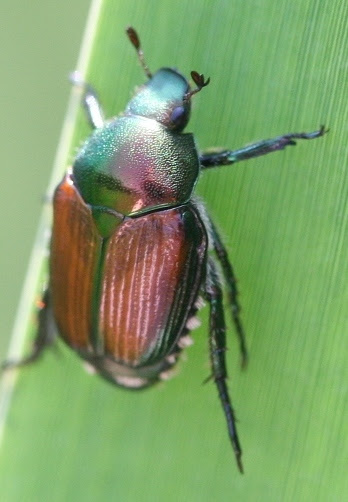 Popillia japonica a.k.a. Japanese beetle.
Although they are a pretty bug, I'm sure they have relatives in Hades. A lady I work with told me they are common on roses and we NEED to deal with them. We already planned on it, but research tells us we need to up the "ante" with these bugs. They stripped the leaves and ate the berries, but did they just finish a berry and move on... NO! They sampled from many berries all over the berry patch. They were so many and to say they were prolific is an understatement! They were stacked 3 high and lined up 5 deep, it was scandalous to say the least! Next year we will cut them off at the pass, chem bomb them, what ever it takes, this is war, let the battle begin! 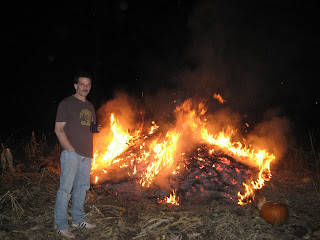 This was our first line of defence for this fall. Last week Jon cut ALL the canes, Willy stacked them and we burned them. No spring berries for us :( but there will be chemical warfare in our back yard!
Posted by Jody Blue at 6:45 PM

You sure are cute in your berry pickin' attire, Jody Blue!

So, whatcha gonna do with all those berries? Make preserves? And send 'em to Oklahoma? ; )

No, she should make preserves and send them to her dear sister in Washington State! I did give her a God Child after all. Oh and did I happen to mention I also chose you as my maid of honor. . .oh, and I came and helped you when you had babies. . .what else can I guilt you with. Sorry ABM, when it comes to raspberries I have to pull out all the stops. :)

you are such a CUTE little farmer!!! And I loved all the pictures!!

I have a caption for pic number one! : General Blue surveys the field of battle (and then goes inside for some berries and cream)

I can see you're a farm woman at heart! Maybe you should come build a bungalow on our farm when those kids disperse so I could see you often. We could start a commune ;) Hey, I'm liking this idea! barb

So far no Japanese Beetles here. They tried to get a foothold in Grand Junction but everyone went on the warpath and last year The EXTENSION agency said they were gone. Boy do I hope they are right.

My mother ALWAYS grew raspberries. Whenever I see them I think of her.

good for you for taking action!!

Schnitzel and the Trout said...

Jody, Jody...always thanks for visiting my blog and commenting. Hope your turkey day is blessed.

Oh, it is so frustrating to have your harvest ruined by bugs. It happens with us every year when we try to raise corn. The moths lay their eggs in the ears during the early part of the year, and the larvae eat the ears. What they don't get, the birds get the rest. {: Maybe next year will be better? Have a happy Thanksgiving! blessings,Kathleen

I believe in live and let live as much as possible also. But japanese beetles don't have the same philosophy, so I say it's all-out war! I remember them when I was a kid, attacking some grapes we had. I would be riding my horse near the grapes and get japanese beetles flying into my hair or face. Can you say EWWW!!

BTW, you DO look quite country in your berry pickin' outfit. And those are some mighty fine lookin' berries, finest I've seen in a long time!