On June 17, 2010 a tornado ripped threw the Wadena MN area, Jon's hometown. With in hours facebook was full of pictures from the area. Can I just say I love facebook!?! With in a short time after the storm I knew that my Aunt Ruth was fine, although 3 blocks from the twister her home was fine. I also knew that my Aunt and Uncle in Deer Creek were ok and their farm had been spared, I knew that my cousins Grma H. who is over 90 years old was ok and had just lost power. Then the pictures started to pop up on fb, for days we had a virtual tour of the devastation. The 6 hours away from family and friends, didn't seem as far. Yup, love that facebook. Over the 4th of July weekend we traveled there. So sad to see places that we hung around just gone. All but one of the pictures I took, keep in mind that I took them two weeks later, and ALOT of clean up had taken place. If you want to see more pictures YouTube or google. 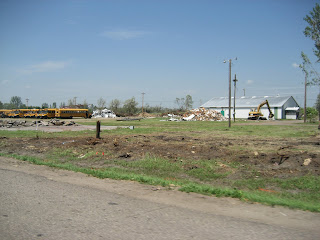 The north end of the Wadena County Fair grounds, this was one of our date spots. 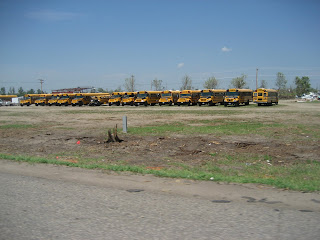 I don't think any of these school buses will be ready for next fall. Some of them were thrown across the highway. 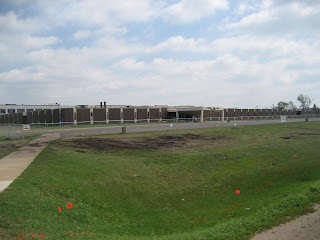 This is the high school Jon graduated from. The roof was peeled off and balled up like aluminum foil. They will bulldoze and build a new school, in the fall the kids will go to the local community college and the college students will attend other colleges in the area. 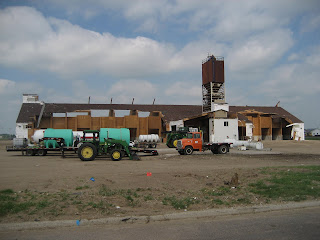 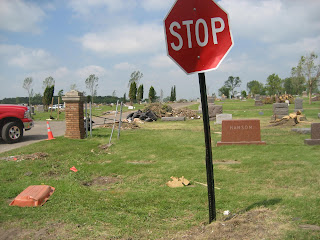 The cemetery lost so many huge trees, and stones were flung around, a couple are still missing. The cross with Jesus on in the middle, stood threw the storm. As we were driving around looking at all the debris and damage, Grace said it looks alot like Mexico. 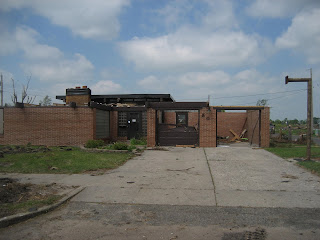 One of Jon's friend's grew up here, Jon spent may hours hanging out there. 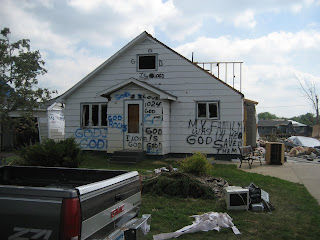 Now that puts things into perspective. 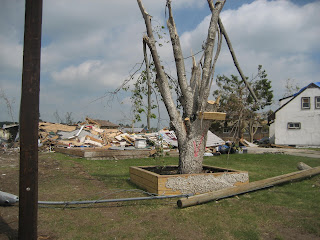 That tree is plastered with insulation. 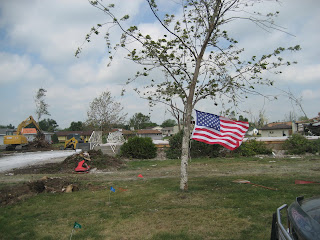 No need for commentary on this picture, it was the 4th after all. 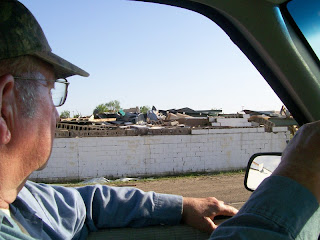 This is the one picture I didn't take. It was taken by my Aunt the day after the storm. When this picture made it to facebook via her grand daughter for me this was the one that broke my heart the most. That is my Uncle, and he is usually smiling. Even though I couldn't see his whole face I knew he was in a state of awe...and not a good state of awe either. To know that his landscape the way he knew it, now had been forever changed, it made me so sad. We can see havoc and devestation on the news and web, and be saddened by it, it is when it touches those you love that it becomes a reality, when it really rocks your world. Reminds me of of this song. http://www.youtube.com/watch?v=aq-_zwyTeGc
Posted by Jody Blue at 12:02 AM

Awww, tears again! The summer of 2005, the winds fell a tree on Grandma's house while I was living there. Dad (the uncle in the pic) knows it can happen to anyone. Their friends, the Maloneys, lost their farm in this one. Thank goodness they are retired with no livestock. Leaf River Ag....it's almost stunning. I can't tell you how many ties I sat out in their parking lot while Mom did her business. The FairGrounds---gone! This was an F4 (at times almost 5) that went through Wadena, and there were no fatalities. God is Good!

Very thankful that there were no lives lost, but sad that there was so much loss and things changed forever.

Weather! It has it's own mind and we can only accept it.

I'm so glad no one was hurt. The damage will gradually be repaired, but like Callie says so many things will be gone forever.

Yes, tears. So hard to see people struggle. The most humbling of the photos is the house with the writing. Their home is gone, and probably most of their possessions. Their community is a wreck, no school for their children. So much they could complain about and be angry, yet they praise God. What a beautiful testimony. God is good. That no people died is amazing. That we remember to be grateful is the lesson I take from this.
Thanks for sharing.

Whoa--tornadoes are so devestating--We live in tornado alley and I greatly fear them, having been in one before. They are absolutely terrifying--how fortunate that no one lost their life.

Kathleen From Eggs In My Pocket said...

So very sad. Glad your family is ok. blessings,Kathleen

Ahhh Jody I'm so sorry, I'm glad your family is okay but the devastation is heartbreaking.

Hi Jody - thanks for stopping by this week!! We agree - it is amazing how communication has change they way we hear/talk/see disasters. Our area was hit by a tornado in June - your pictures look a lot like the scenes that we saw. It was amazing how one house would be gone, and the other beside it stood! Wishing all of your family the best with this devastation around them!!
Karla & Karrie

Growing Up A Country Girl said...

Touching blog entry -- thanks for visiting my piece of the country! I call home in Minnesota -- and went to votech in Wadena... I have seen many pictures but haven't visited since the tornado came thru.... I'll be back to visit you soon.