Birds of a Feather...

For about a week during the summer I had been watching this baby bird in our back yard who obviously jumped the nest well before it was ready to fly. It might have been Papa Robin but for the sake of my having a mini revelation we're going with Mama Robin. That Mama Robin fed and watched over her off spring like a hawk, and when it strayed too far or I was too close she called it back again. But there were times when all she could do was sit on a branch and watch. 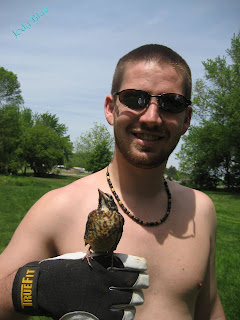 One day when J came home for a visit he yelled for me to come quick and bring the camera, he had rescued a bird from the jaws of the "beast". I told him how we had been observing it, we put said beast in doors and he let the little guy go and it wasn't long and Mama bird was checking her baby out and no doubt a bit thankful for the rescuer. 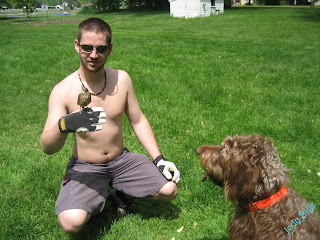 Our J didn't jump the nest too soon but where he landed at times saddeneds us. We feed him when he comes around, hang out and love on him and the pretty girl who sometimes tags along. I probably chirp a bit too much for his liking a times. I do hope that when things get too much and the world out there would like to chew him up that there is someone who would rescue him from the jaws of life...and I will be thankful. 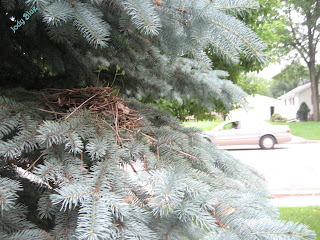 Meanwhile in the front yard a whole nother saga was taking place.We live on a busy main street on the edge of town, traffic moves fast, you have to pass our home to get to the high school, the pool, the Piggley Wiggley, etc. And look where a Robin couple built a nest, and they kept it in use for weeks, I think they had 3 different clutches of eggs. I tried to not be too much of a busy body neighbor. 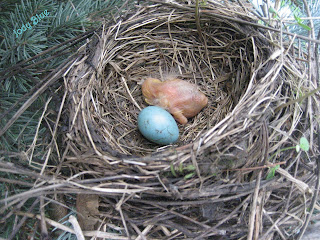 I heard a story about a contest that was held to paint a perfect picture of peace, the final two pictures where unveiled. The first was of a glass smooth lake with sheep grazing along the shore. The second was of a storm darkened sky over a rushing torrent of a waterfall, a tree growing on the precipice and on a branch sitting on a nest was a mother bird, covering her young. 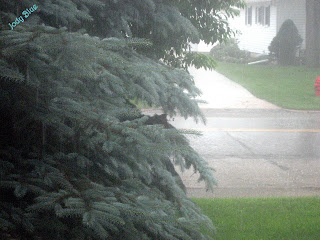 Peace in my own front yard.
We had some wild storms this year and this Mama held tight. I would watch her, once I thought the nest was blown away so I went out on the veranda and could hardly see the few feet threw the rain and yet there she sat, all hunkered down in her nest waiting for the storm to pass. I'm learning. 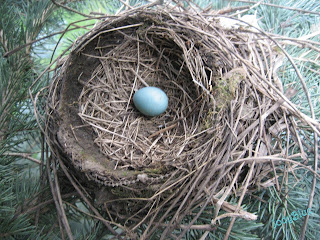 And look that Mama Robin even built her nest with love!
Can you see it woven in?
Posted by Jody Blue at 10:40 PM

I see the love! I wonder what she thought when she found the little heart!

Letting children go and grow is the hardest part of being a parent. The funnest part is the grandchildren that come along later!

Seriously I do believe the letting go is the most difficult part of this momma gig! Thanks for modeling for me.

How cool is the sweet little heart in the nest. Another reminder for us. Build the nest with love, do our best, and God will cover the cracks.

OH! Make me cry, Girl. Perfect! Isn't God just so good to give us glimses of insight into life situations thru His nature? Love it!!

God takes care of the sparrows....and us too.

That's why I have Desirae. God knew that I would not be able to let go of Nick any other way.

Life lessons...we get them in the best ways - don't we? Love this Jody!!

Looking out for the little bird and then saving it from the dog makes for a heartwarming story. Glad to hear you have your own collection of aprons. There is something about putting on an apron that makes me happy. Thank you for commenting on my blog.

I love this post, Jody, and, as you know, I can SO relate to the wayward son bit. Thanks for passing on your lesson from Mama Robin. She's something else, huh?

ahh, Jody, thank-you for this sweet, sweet post and pictures.

Such a sweet post! So glad I stopped by and had a wonderful read! blessings, Kathleen

THanks for stopping by...good to hear from you - hope all is going well!
Karla & Karrie

Thanks for your comments! It's nice to hear from someone who "knows" and understands the stresses of working in Special Ed.
I would hate to leave in some ways, but it is getting really difficult physically since several of our students are wheelchair bound and need assistance. I'm just getting too old and tired! Also although I do my best to get along with everyone, there is a lot of contentious spirit right now and it is dragging me down. I feel caught in the middle. The kids are great, but we are getting more and more students who really do not fit the Community Based Instruction program--they are unable to work at all due to profound disability (mental & physical or their behavior makes it so that we cannot take them to a work site. Unfortunately, school districts do not provide what they really need which is therapeutic daycare. I'm just TIRED!!!

Hang in there with your prodigal son. Two of my three kids were prodigals--my son got into trouble running with the wrong crowd as did my youngest daughter. I thought many times I would never see them through it, and although nothing is perfect, it is so much better now. I did pray and pray and pray--I need to pray more!
V.

Now on to sharing your visit to WA with your readers. You are so clever, I can't wait to see what you put together.