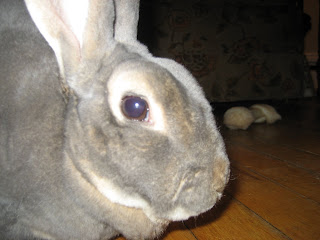 Benjamin Bunny became Haredini, if only for a day! He chewed away at his cage and finally hopped out of the hole he made. He's getting crafty in his old age. Ben is over 5 years old, to be honest I thought he wouldn't live threw the winter. Its been cold and he has lost alot of weight, even though he's a well fed bunny. 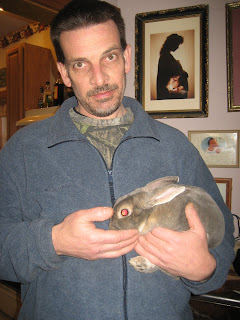 The Great Bunny Rescuer...
...and resident hutch fixer!
Jon was outside when he felt something tugging at his pant leg. Ben was letting him know some maintenance was in order. His little stunt landed him in the bath tub while we found something tall enough to put him in, he got to spend the night in the house. For a tiny-and I do mean tiny-bit I thought how fun it is to have a house bunny. Then I snapped myself out of it with the memory of Ben's predecessor Pete (Peter Rabbit-we are so original) who was a house bunny, and was a ton of fun-but pooped a ton! 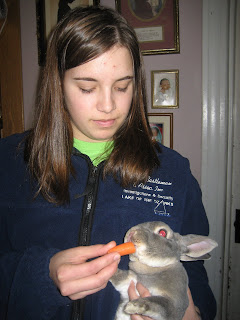 Grace was a hoppy--I mean happy girl when she learned Ben had been rescued!
Posted by Jody Blue at 9:54 PM

I'm so glad Ben had the sense to tug on Jonny's pantleg. That may not have had such a great ending if the Leapin' Labrodoodle had found the bunny first.

I know two people in our area that have house trained thier bunnies.

Thanks for stopping by my blog, I'm enjoying yours

Oh...the bunny days! Is that Grace's FFA jacket? Such an animal lover!

oh he's so cute! and smart! I'm so glad he didn't hop off on some bunny trail and get lost!