St. Patricks Day at our Home 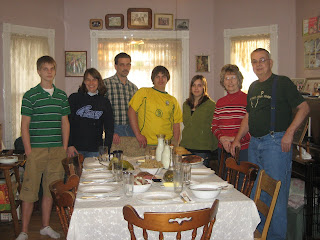 Avery, Mel (Jon's sister), Jon, Willy, Grace, Mama Lou, & Jerry
We never pass up on a holiday that involves good food.
Besides, everyone is Irish on St. Patrick day, even a bunch of Germans.
Mama Lou & Mel drove down for Willy's band concert, they were happy when the realized they would be a part our celebration. We were blessed to have them. Jerry (Jon's Dad) usually spends St. Patricks day with us. 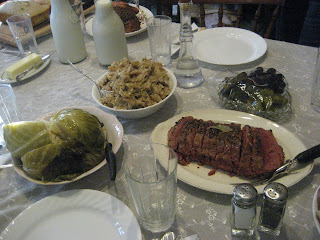 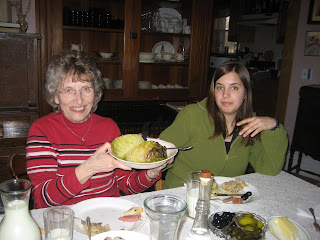 Grma & Grace
Passin' around the green!
Mama Lou loved the Irish Soda bread so its a keeper for next year. Jon and I both enjoyed it better the second day toasted. 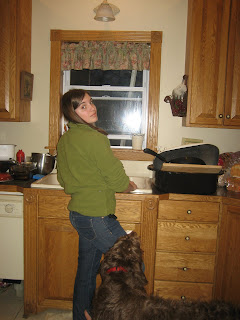 Grace did ALOT of work-- start to finish!

Oh, I want to live close so I can come over for a table cloth party! Oh, that's right. I am moving and get to stop by on my way through the midwest. YIPPEE!! I am so excited.

There's a song the Black Family does about colcannon. I didn't know what it was, so I goggled it and what I found were several descriptions and recipes for something that reminds me very much of your "concannon." Do you suppose you've been making an authentic Irish dish and calling it by some crazy mispronounced American name? ; )

Or maybe there's just more than one name for it. Anyway, it's just interesting that so many things about colcannon/concannon came up at the same time.

Okay...now I'm starving from looking at those pictures! Do you have any leftovers you could send my way? :D

Old Woman in the shoe--I spelled it wrong! who knows what I was thinking. I'm editing right away, thanks!!!!