I've been making Rosettes for years. I love them, I could eat my weight in them - if it were humanly possible. I looked on-line to check out how other's are making them, I was disappointed. Most sites just had the recipe, but no tips and techniques, so I'm sharing!
Rosettes
2 eggs
1 Tablespoon sugar
1/4 teaspoon salt
1 teaspoon vanilla
1 cup milk
1 cup flour
Lard -- for frying
sugar -- for dipping finished rosettes in

Mix first 6 ingredients until smooth. Let rest until room temp. Don't stir. Skim off foam. Heat lard to 375*-400*. Heat iron in hot lard. Tap on paper towel to remove excess lard. Dip iron into batter. Dip battered iron into hot lard. Hold in for a few seconds and pull away, you may need to use a fork to help rosette off iron. Fry until delicately brown. Turn once. Fry a bit more. Remove. Place on paper towels. Cool. Gently dip in granulated sugar. Store in air tight container.

Tips
*Don't use Armor Star Lard it tends to smoke. I use Snow Cap.
*Skim off foam with a flat end pancake turner so batter doesn't get to stirred up.
*I use clear glass bread pans for batter, lets you see the foam better, and is the perfect size for a double rosette iron.
*I mix 2 batches and put each batch into a bread pan.
*Don't cover iron top with batter.
* If batter "falls off" iron - iron could be to cold - your moving to slow - or the batter is to
saturated with lard and needs to be tossed
*Don't use last 1/2 inch of batter (lard saturation).
*Have a nice stack of plates, it helps with less lard build up.
*After removing Rosette from hot lard, place pretty side up, and don't stack any on top of each other or lard will drain onto the bottom ones.
*I store Rosettes in an ice cream buckets (I have alot of them. I may have eaten my weight in ice cream!) 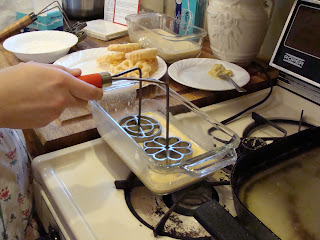 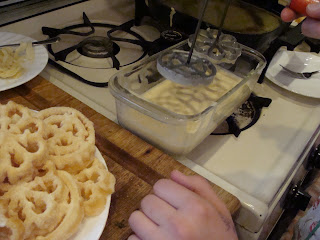 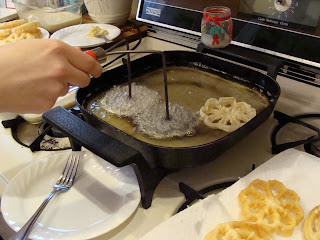 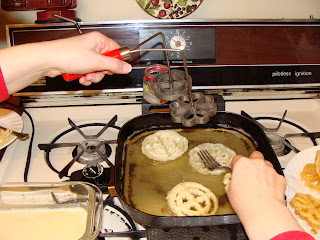 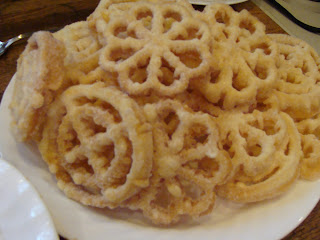 Well worth the mess and effort!
Posted by Jody Blue at 12:32 AM

I love it!! You two are the cutest! I still have to make them. I always hate the way everything--house& hair--smells. I use crisco oil-never tried lard. They should call lard something else. The name evokes bad stuff. I may have to get Gracie a new apron--no chickens.

ADORABLE!!! I also love how we "modern" women can still find ways to use the things our forebears did--my cell phone is there too!!

I am positively GREEN over your DOUBLE rosette iron!! The sweet Norwegein lady who taught me uses a full 2 TABLESPOONS of vanilla!! The house even smells nice after-instead of greasy :D

So last night at Lenten Service a friend gave me this set... how exciting! I found your tutorial and made them for breakfast for my kiddos.... YUMMM-O. Great job with the tutorial, and tips. I did find the last inch or so of the batter not useable. The batter just slipped off the iron. Thanks for the tips, I linked you on my blog!